Okay, so whenever I think of “fat” and “Japan” I think of sumo. But get a load of this, the fattening machinery MacDonald’s is now making our ordinary Japanese friends into super sized fatsos. 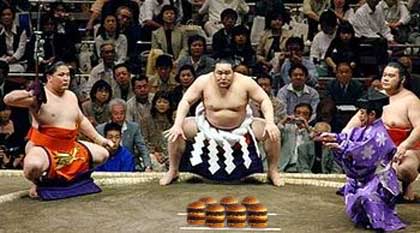 Take a load of this monster. It’s the Mega Mac. A large lard burger with 4 patties. And MacDonald’s Japan made it available this year.

Ever heard of the Okinawa Crisis? The next generation of Okinawans have gone fat on the merits of too much fast-food. Hey, isn’t Okinawa where they have the US bases? Yeah. And it still has the most fast food joints in Japan. Fast food = fat food. As a result:

Experts say that the generation that grew up eating American food is now reaching middle age overweight and at risk from diabetes. Almost 30 per cent of Okinawan men die before reaching 65, and nearly half of men in their forties are obese.