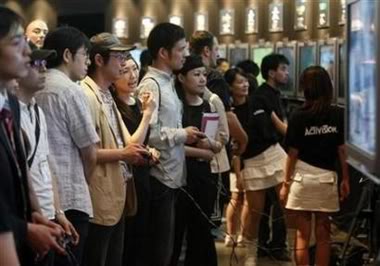 Even if I’m not much of a gamer. Still! These lucky folks who attended the Tokyo Game Show in Chiba, last September 20 got to try out Sony’s PlayStation 3 for free.

Yep, they’re not exactly giving them away for free, silly. But then again, news states that Sony will launch a cheaper model of its PlayStation 3 in the US (what about the Philippines?!), so as to go up against rival game consoles from Microsoft (Xbox) and Nintendo (Wii).