“Grab your d*ck and double click for pron, pron, pron!”

It’s been almost a month since I’ve watched the final performance of Avenue Q Repeat at the
RCBC Carlos P. Romulo Auditorium, but my head is still full of the experience!

You see, ever since I’ve accidentally stumbled on this musical three years ago (I was surfing the Internet for new Broadway productions and musicals – I am crazy about show tunes), I knew I just had to watch it.

I mean, it’s unique in that actors act with the puppets (the actor puppeteers really mimic the puppets). The story is simple yet powerful in its realism. I’m sure it will strike a very familiar chord in anyone who is trying to remain young and idealistic in a very old and cynical world. It’s funny and witty and unapologetic (naughty words and nude-puppets-having-sex galore!). I’ve been longing to get rich so I could just fly off to the US just to see a production of this awesome Sesame Street parody!

I screamed for joy when I found out that there was to be a Manila production September of last year. Unfortunately for me, circumstances back then did not allow me enough liberty to watch. To say that I was disappointed was an understatement. I thought I blew up my last and only chance! I was ready to commit murder!

That is until my friend Nina, got us tickets for the Repeat. 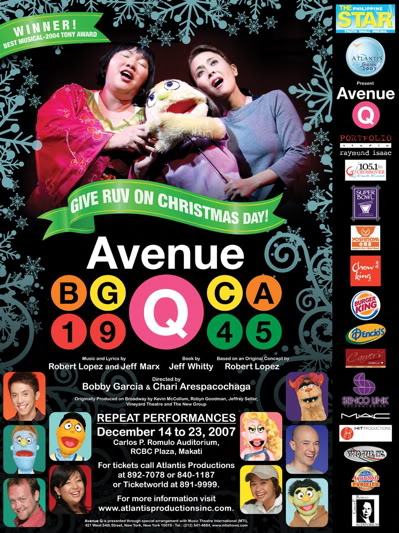 Photo from The Bachelor Girl

It was amazing! I was just so happy to be there, silently mouthing the lyrics of the songs that I (almost- I suck at memorizing lyrics, not to mention the actual singing) already knew by heart. I didn’t share to my friends who were with me the fact that I was teary-eyed the whole time. Gosh, who needed the embarrassment? But, really, one of my dreams have finally come true so I couldn’t help but be a little emotional about it. Oo, mababaw lang ako. Understand though that I’ve waited three friggin’ years for that one while thinking there wouldn’t even be anything to wait for! It might not have been what I intentionally planned, but nevertheless, it did come true!

Avenue Q was, and still is, very much real to me. It’s like the musical of my life. I mean what aptness could be found in lines such as:

I’m kinda pretty
And pretty damn smart.
I like romantic things
Like music and art.
And as you know
I have a gigantic heart
So why don’t I have
A boyfriend?
Fuck!
It sucks to be me!
— Kate Monster, “It Sucks To Be Me”

Could be far.
Could be near.
Could take a week
A month
A year
At a job.
Or smoking grass.
Ha!
Maybe at a pottery class.
Could it be?
Yes it could.
Something’s coming.
Something good.
I’m gonna find my purpose.
— Princeton, “Purpose” 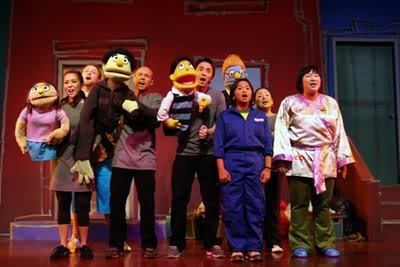 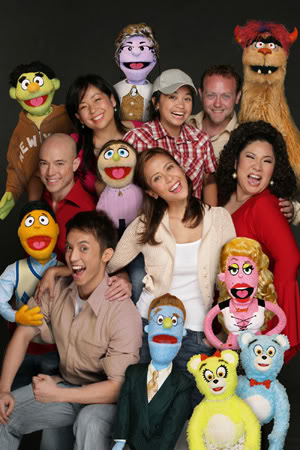 Directed by Bobby Garcia and Chari Arespacochaga
By Atlantis Productions

The cast blew me away!

Not my first time to see Rachel Alejandro on stage, granted that I saw her on Larawan, the Musical, which was waaaay too long ago so she really didn’t make too much of an impression back then. I used to like her for her OPM hits.

But this time, she made me adore her. Rachel Alejandro (and the puppets) was both cute and sexy as Kate Monster and Lucy the Slut. The easy way she switches from one character to another is more than commendable. It was flawless! I friggin’ love her!

Frenchie Dy‘s new to theater but not to performing. She’s a very adorable Christmas Eve, and when she was singing the lines,

it was both funny and heart-wrenching. Frenchie Dy, simply put, was fantastic! She should do more musicals.

Aiza Seguerra fit the role of Gary Coleman to a T. Why? Former famous child stars? Maybe a little short in stature? Hehe… Hearing her say the line, “Try being a has-been at fifteen!” really, really cracked me up! I’ve always liked Aiza Seguerra, and I’m really glad that she’s risen above the child-actor curse.

Rycharde Everley as Brian and Teenee Chan are theater veterans and I already expected that they were going to give their best and I was not disappointed! They were fun to watch as they seem to be having fun in their roles as well.

I’m particularly tickled by Joel Trinidad‘s (another theater veteran) performances as Nickyand Trekkie. And did I mention that I relate a bit to Trekkie? Nyahaha! But as for Joel Trinidad, me like him!

Ahh… and of course, my absolute favorite – Felix Rivera, who is considered to be the Golden Boy of Philippine Theater nowadays (I heard he was in the Manila production of High School Musical as well. But I really don’t care about THAT). Amazing voice! And like Rachel Alejandro, he was able to seamlessly switch between the roles of the adorably naive fresh-grad Princeton, and the “closet homo-whatever,” who has a crush on his best-friend/flatmate, Rod. I heart him, well… not in a I-wanna-snog-the-guy-to-bits, but in a Broadway fan-girl sort of way.

A standing ovation for everyone! Brava! 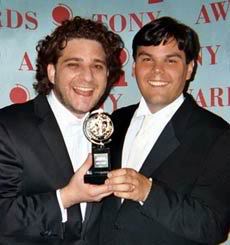 And if I can only meet the creators, Robert Lopez and Jeff Marx (Bobby Lopez is part Pinoy anyway and that’s another reason why Avenue Q is sugoi in my book!), I would also give them a kiss on the cheek each 😀

Of course I don’t have a vid of the Pinoy production. But anyway, just to give you a small inkling of what it was like, here’s the original American cast during the 58th Tony Awards. Enjoy!