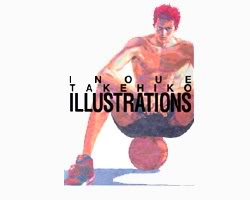 Photo from Inoue Takehiko on the Web

Indulge me by reading this long-winding tale before I get to the point. Thanks!

See that Slam Dunk book of illustrations above? I have one exactly like that. I actually had two but I had to donate one as a raffle prize during Ongaku Society‘s Ongaku Rewind.

I bought them in Tokyo, one for moi and the other for this org-mate who
pleaded at that time for me to buy her one and then claimed that she didn’t want it anyway when I had already shipped the darned thing (goodness!). I went out of my way to grab the last copy even if I had to shove the 6-foot high school kid who was about to grab it – okay the last bit was an exaggeration but as I said, humor me.

At that time, Slam Dunk’s creator, Inoue Takehiko was supposed to have a signing scheduled in a week somewhere at Kichijoji, which was quite near from our place. Many Slam Dunk and Vagabond stuff were selling rapidly in most of the book shops so I consider myself really lucky to have gotten a copy, much less two. Unfortunately, I wasn’t able to go to the signing because I had work. I would have loved to meet the guy and ask him if he could draw me a chibi Rukawa holding an “L.O.V.E. FLORI” placard… Oh well, so much for my fantasy! 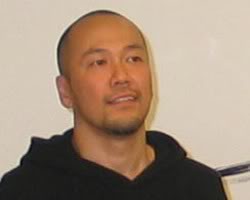 Anyway, New York was kinda lucky too last November as Inoue Takehiko began to work on a mural at the newly opened Books Kinokuniya‘s in midtown New York City.

By the way, when will we have a Kinokuniya store here? I swear their Tokyo branch is one of the biggest bookstores I’ve ever seen (as if I’ve seen lots). I could practically live there and be very, very happy!

Photo from Inoue Takehiko on the Web

Well who knows, one day the great man could visit Manila, and my chibi Rukawa fantasy might still come true. I mean, it happened to my Avenue Q fantasy, right?