Okay, so we’re all done raving about how Iron Man kicked (and is till kicking) ass and how Robert Downey Jr. justified sporting those Iron Man buns of steel. The character really worked and I love RDJ’s humor all throughout.

Latest casting report for our much awaited Marvel movies – wrestler Triple H is in the running for the role of Norse god of thunder, Thor. I’d have to say that it’s probably because he loves to wield that sledgehammer in the WWE. 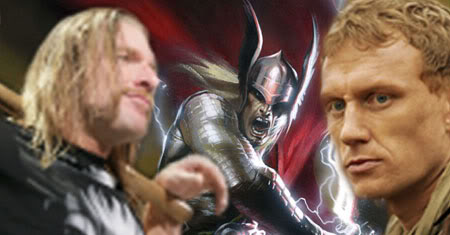 Though reports also have it that Kevin McKidd (for those of you who watched the Rome miniseries on HBO, he’s Lucius Vorenus) is also in the running. While I like British actors performance-wise, Triple H does have the bulk and a bit of Nordic features about him to possibly pull the role through. As long as he doesn’t talk like, “I’m Thor-uh. The God of Thunder-uh,” emphasizing each sentence with a grunt-like release of breath.

Marvel will probably continue to kick some Hollywood butt over the next few years as they bring their classics to the big screen and with much justified renderings. If you haven’t seen the end credits of Iron Man…

then you should. There lies the big hint that they will indeed be pushing through with the Avengers plot with upcoming films, The Hulk, Thor, and Captain America films in the next few years. Using the Samuel L. Jackson Ultimate Nick Fury for the film (played by the bad motherf*cker himself) is a treat in itself.