If you happen to be a fan of The Big Bang Theory (even if it’s only for Kaley Cuoco) then you might have stumbled upon that episode where Sheldon proposes that they resolve some petty issue with Rock Paper Scissors Lizard Spock.

Think Geek already did the Google-fu for us and they’ve found the source of this geeky twist on traditional RPS. All credit goes to Sam Kass who figured out a way to lower the tie probabilities of the standard game. Basically, the rules go:

Oh, and I would surely like to have this shirt too: 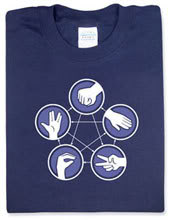 Thanks to BA for the heads up.