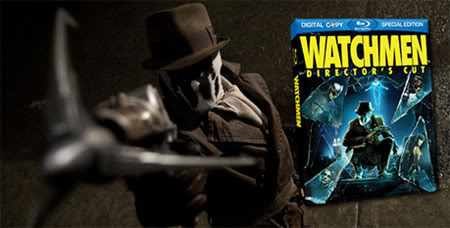 I liked Watchmen all because I am a fan of the graphic novels. That’s why I got to appreciate the details and all. But given a non-fan point of view, it’s way too long and way too messy to be regarded as a good film. It’s a graphic novel supplement at best.

Now who wants to see the Director’s Cut? It’s still a couple of months down the line (release date’s on July 25) but details have been revealed about the cut that will be appearing on DVD and Blu-ray.

The cut will feature 25 more minutes of Rorschach and a few more details. Blu-ray buyers will be treated to a Maximum Movie Mode that plays a whole lot of commentary, details, and even pages of the graphic novel appearing on the side. The Blu-ray release will also feature the following:

So is it high time to invest on a Blu-ray player (or a PS3)? Maybe.