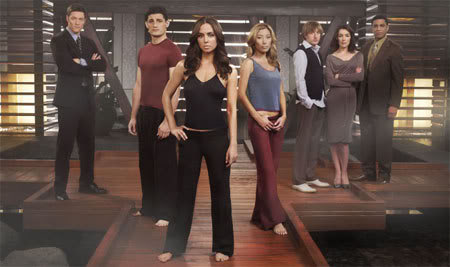 Not many people are amused by Joss Whedon‘s prostitution show AKA Dollhouse but we here at Sugoi Stuff are fans. For me, it’s mostly due to Eliza Dushku and Miracle Laurie but the show had its moments.

Now that’s a sentiment Fox executives might share (the moments not the chicks) since the show got renewed for a second season despite the poor ratings.

Anyway, the US DVD was released a few weeks ago. Aside from the aired shows it contains two bonus episodes – the pilot and a 13th episode that were both unaired.

The pilot was Whedon’s first work with Dollhouse in mind but test audiences found it too dark and sketchy that he had to shoot another one.

13th is a special what-if post-apocalyptic look at the world with Dollhouse technology meant to be a stand-alone show.

If you’re a fan, you might want to grab a copy of the DVD. But yeah, for the rest of you cheapskates, we’re sure you know your way around the Internet. :p