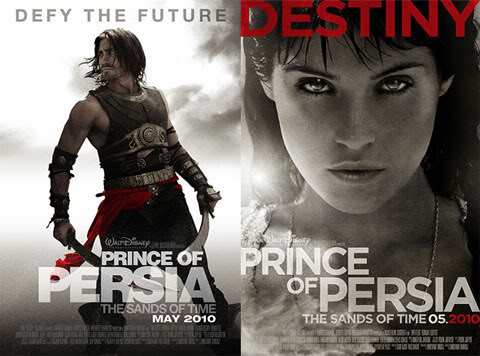 For PC gamers from years ago, Price of Persia undoubtedly brings back memories. Too bad the franchise never got back the same X-factor that old game had. Still, that doesn’t stop Disney from doing something about the franchise. Coming next year is Prince of Persia: The Sands of Time (Yes, it shares the same title as the 2003 game.)

And these here are the two newly-released movie posters featuring the stars Jake Gyllenhaal as the Prince (who has noticeably hulked up for this role) and Bond girl Gemma Arterton as the Princess. The plot still echoes the same elements of the game franchise – evil wizard, beautiful princess, brave prince and some magical artifact. Ben Kingsley is reported to play the role of the bad guy so that should make this more interesting.

Well, all I can say for now is that Gemma’s got that sexy fierce look working just right.