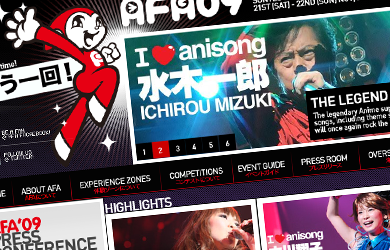 The Anime Festival Asia as it happened this recent weekend, November 21 and 22 held at Suntec Convention Center, Singapore. I don’t have much time, and doing a full-on report when I couldn’t get around everywhere in the event wouldn’t do much justice. So here’s a quick rundown of what happened at the event.

The crowd is definitely bigger this year. The line to the ticket booth didn’t let up until around 2 or 3 in the afternoon.

Selling areas have also been arranged better now, but still due to the volume of the crowd, most places are still hard to get through. Most especially the shop that sold custom prop swords from Bleach.

I could only take a picture of the shop sign, and take a peek of what’s happening inside, and saw that food served are actual food. There was a long line every time I pass by. And unconfirmed second-hand information says food is expensive.

We wanted to meet and greet Masked Rider Kabuto, but only saw the Rangers of Power Rangers Jungle Fury. We got nice Kamen Rider gashas off the machines though. The BAKUC (Bandai Action Kit Universal Cup) had a relatively not so impressive turn-out, but good nonetheless.

As the stage has been curtained away from immediate view, getting to it was a lot harder this time so we couldn’t see or get to the stage to see what was going on. We did catch the seiyuus of K-ON doing a sample dubbing on stage. We were too far back though to see anything clearly.

As the stage has been closed off from public viewing, it was more advantageous for people who paid to get their money’s worth– nearer the stage and had seats. The crowd who opted not to pay additional for this was in the free standing area, relatively farther away from the stage than the seating crowd.

MAY’N’s stage performance was the best closing, with awesome back up dancers and choreography. She sang mostly new songs.

All performances were concert-worthy, making the crowd beat their light sticks in the air. May’n and Fukuyama’s duet was also awesome, singing acoustic version of Diamond Crevasse and rocking Dynamite.

The only let down was Miku Hatsune’s performance, as she only sang 3 songs that were all from the Project Diva game. And if you played the game… the game was better.

All in all, there is still more room for improvement, but this was definitely better with the organizers learning from last year’s event. Also, we got better merchandise deals too.