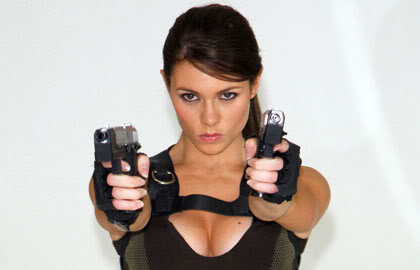 Okay, this newsbit is more than half a month old but since I’m a fan of the Tomb Raider franchise, I’m giving it a take. I just hate it when some of these newsbits get past me.

Tomb Raider is a twelve year-old franchise and Lara Croft has undergone makeovers complete with fluctuating breast sizes. Many a reason for hot-blooded gaming geeks to rave about the game. As far as real-life people portraying Lara Croft go, it has been a history of hits and misses for them.

When word first got out that Denise Richard was slated to play Lara in the first movie, I was pretty excited. Hey as a teen, all it was about were boobies. Now, in hindsight, I was pretty glad that didn’t push through. Angelina Jolie did a pretty good job portraying Lara. You can’t deny the sultriness she gave to the character.

And then there are the models who go about dressing up as Lara Croft. Whether officially or unofficially, we’ve seen a lot of them big-breasted and perky-reared models trying to be Lady Croft. With the release of the new TR game (Tomb Raider: Underworld) nearing, they’re revealed the new face (and bust) of Lara Croft – British gymnast and model Alison Carrol.

Well, she doesn’t seem to have the vixen-ish appeal. But she’s British. She’s got the boobs (pretty decent given that she’s a gymnast). And she can do backflips and handstands worthy of Lara Croft. Portraying Lara has been instrumental to the rise in recognition of Nell McAndrew and Lucy Clarkson to name a few whether the same would happen to Carrol, we’ll have to wait to know.

Oh and here’s a video.