Home » Gadgets and Technology » Nintendo DS gets a piano

Nintendo DS gets a piano 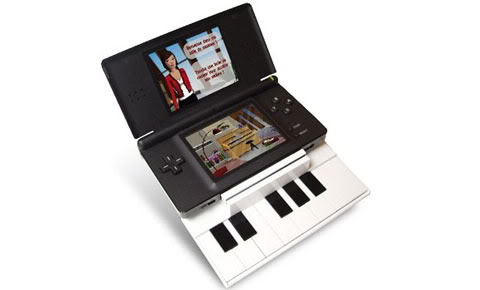 Music sims are much better with tabletop consoles. The Guitar Hero pack for the Nintendo DS was a pretty decent attempt and Rock Revolution and Ultimate Band made good use of the touch pad but they can’t get any better than playing Guitar Hero or Rock Band on a Wii/PS2/Xbox.

Anyway, for DS gamers, you might be content with existing titles but those who have been lucky enough to be forced by parents to take piano lessons might be looking for a piano twist. Well, Namco Bandai is remedying that with the Easy Piano. It’s a music sim that uses mini-keyboard that slots in you DS’ GBA slot (a la Guitar Hero). Heck, even Rock Band doesn’t have a keyboard in its ensemble.

A pretty neat concept but given the size of that thing? Might be better of playing with those Casio mini-keyboards.