Home » Arts and Culture » Beyond tentacles

I know some people gleefully rubbing their hands right now. They bet that it wouldn’t take me long to post something so Flori-esque . I roll my eyes upwards at that. Seriously, folks. I am quite wholesome despite how other people seem to paint me otherwise.

I found a very interesting article in The Japan Times Online. Writer, Michael Hoffman shows us a cohesive and comprehensive rundown on the history of sex in Japanese culture. From the “conception” of the islands of Japan, to literary erotica in the Tale of Genji and The Pillowbook, from Japan’s take prostitution to the current more “sexless” society.

What I liked best about the article is that Mr. Hoffman was able to explain our puzzlement with Japan’s strange but nevertheless fascinating view on sex with just one sentence: 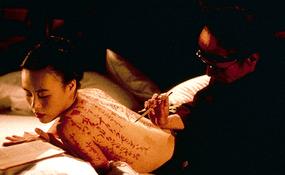 Still from the movie The Pillowbook. Image is taken from Juggling.org

For more of the article, please click here: Japan’s love affairs with sex