In lieu of the upcoming launch of Mangaholix, Groundbreakers Inc. and Manga Kami! studios proudly presents: 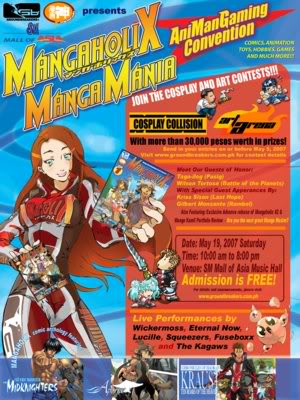 Where: Mall of Asia Music Hall
When: From10:00am to 8:00pm on May 19, 2007
Guests include: Taga-Ilog, Gilbert Monsanto, Wilson Tortosa, and Kriss Sison
Band performances by: Squeezers, Lucille, Wickermoss, Enternal Now, Fuseboxx and The Kagaws

Aside from the manga launch and band performances, the event will also be featuring cosplay and art competitions.

Hope to see you there!