It’s not enough that L’Arc~en~Ciel has just kicked off their 2007 tour, these guys who made me listen to J rock has also announced that starting August, they will be releasing one sugoi stuff every month for 5 months!!! According to Sports Hochi, this will start with the band’s new single, “My Heart Draws a Dream” on August 29 which will be followed by the DVD of their 2006 Tokyo Dome performance. 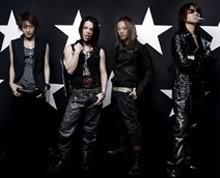