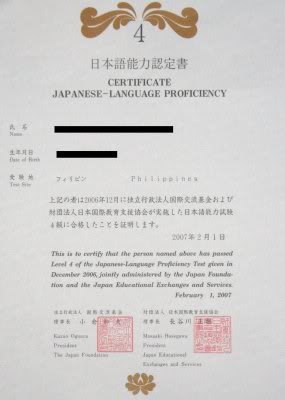 The Japanese Language Proficiency Test (JLPT) will be held on Sunday, December 2, 2007; it will commence simultaneously at 9:00 a.m. in three (3) different venues – at the De La Salle University, Taft Ave., Manila , Philippine Nikkei Jin Kai – International School, Angliongto Ave., Lanang, Davao City and at the University of San Carlos, P. Del Rosario St., Cebu City. The JLPT is administered once a year – worldwide, by the Japan Foundation in cooperation with other cultural exchange/educational institutions, in order to evaluate and certify the Japanese language proficiency of non-native speakers.

More info can be found at the JFMO website.