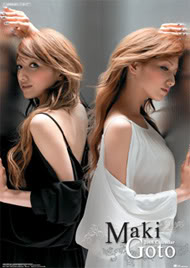 Former Morning Musume member Goto Maki revealed that she is finally graduating from Hello!Project during her tour at Saitama’s Sonic City last October 28. Her decision to leave was propelled by the theft scandal that involved her brother, Yuki earlier this month. Another reason is that she wants to be considered as a serious music artist and no longer as an idol.

More in Japanese from Sanspo.com