It’s time for another update on our favorite brawler’s next-gen successor.

Previously, we had you take a peek at SFIV’s new characters, Crimson Viper and Abel. Now, a third new entry to this roster has been confirmed: Introducing El Fuerte! 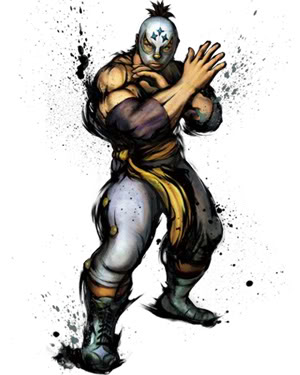 Judging by his looks, El Fuerte, Spanish for The Strong One, is a pro wrestler whose style is the famous Mexican Lucha libre. With pro-wrestling being mentioned, it is without a doubt that this guy would be rivaled against Russia’s “Red Cyclone”, Zangief.
Whether we would see him unleash acrobatic moves ala-Rey Mysterio is still a question, since no gameplay footages of El Fuerte has been put online as of yet.

As Capcom’s official blog states, El Fuerte’s profile is that of a person who divides his professional life with Lucha libre and gourmet cooking, but contrary to his wrestling skills, he is a bad cook. Wait, I think I can somewhat analogize El Fuerte with Tekken’s Marshall Law…then again, maybe it’s just me.

As for other updates, SFIV runs on the Taito Type X2 arcade board inside a Taito Viewlix cabinet, marking the first time that a numeric sequel in the Street Fighter series will run on non Capcom-proprietary hardware.

Balrog (Mike Bison) and Sagat will return in the game as bosses, the one after the other; it’s just a wonder whether Sagat is the final boss at that. And while characters specific to the Street Fighter Zero series or Street Fighter III have not been announced, producer Yoshinori Ono stated that characters such as Sakura or Ibuki could appear in console versions of the game IF or WHEN such versions are developed.

The character designs will try to stay true to SFII, though Akiman no longer works for Capcom. Daigo Ikeno takes the seat as the art director and character designer for this “interquel” (word courtesy of Wikipedia).