Home » Crafts and Hobbies » Kobe jumps over an Aston Martin

Kobe jumps over an Aston Martin 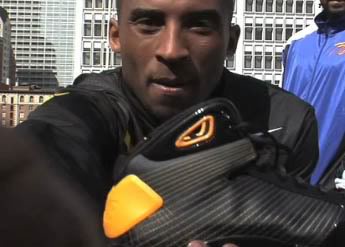 Would you believe it if somebody tells you that Kobe Bryant had just pulled off a major stunt, that is to jump over a speeding Aston Martin? I know you wouldn’t, though it is possible.

Just look at this video from Kobe’s official website to see for yourself.

After multiple views, I decided that the video is not fake; however, the stunt is not real too. What I’m saying is, he did jump that high, but he never jumped over the car; he jumped at the right side of it. The camera was positioned in a way that it looked that he did so. Even Kobe himself said it wasn’t real. And just like most of the people who commented about it, they (the Lakers higher-ups) will never allow him to do that stunt. Ever.

Final notes: I don’t know what he’s advertising: the Aston Martin, his high jump, or the Nike Hyperdunk he’s wearing.

Disclaimer: I am not a Kobe fan, but I don’t hate the guy either.