Simon Pegg and Nick Frost may star in Tintin 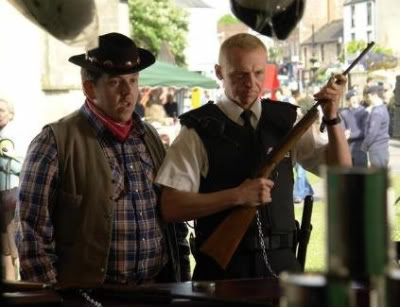 Before I continue, let me first say: OHMIGOSH!!!

Growing up with the Tintin books by Belgian artist Hergé, hearing news of it being turned into a movie by Steven Spielberg and Peter Jackson gave me a geekgasm.

So hearing this news that the possibility of having two of my favorite British actors star in this movie, I am completely breathless! And I know fellow fans, Alex and Flori would like another movie with Simon Pegg and Nick Frost in it.

Sure, the Thomson and Thompson characters are supposedly detectives that look so much alike, but since the movie will be in 3D, all they will be lending in the movie are their voices and chemistry which by their own right is good as it is.

What? You haven’t read The Adventures of Tintin? Blasphemy! Okay, so you have at least watched Shaun of the Dead or Hot Fuzz (where Simon Pegg and Nick Frost star), right? What?! No? Have you been living under a rock all this time?

Let me show you a peak of what you’re missing after the jump.