Thanks to MyAnimeList for rounding up the Spring 2018 line-up! 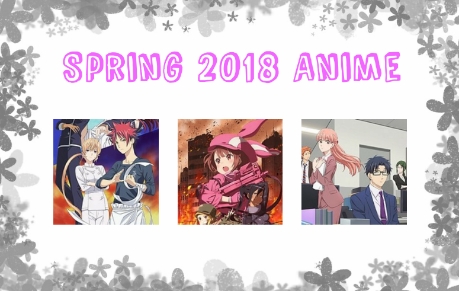 Well, it might be more useful to you, guys. I can only afford to watch three shows on top of the one Korean drama I’m into right now.

I wasn’t very familiar with the light novels when I first got into the anime but having my favorite seiyuus cast in the first two seasons (Matsuoka Yoshitsugu, Koyasu Takehito, Sawashiro Miyuki) was the biggest draw for me. Those who are familiar with the original seasons may be a bit disappointed as Kirito is nowhere in sight.

I’m currently two episodes in and despite the lack of Kirito and the other characters I have grown to love (or hate); I’m actually enjoying this latest installment in the series. Of course, it’s still a little early to tell. After all, I’ve been known to drop a show in the middle of the season. But I think it looks promising. The main character isn’t annoying and in fact I’m looking forward to how her character progresses inside the virtual world and outside of it.

This is basically the second half of the third season of Shokugeki no Souma. It flew into my radar as it falls under my favorite genre – food anime. I refused to start watching this installment before I’ve even watched the first season. So I marathoned the whole thing after the kids have gone to bed just to get me up-to-date. I half regretted it as I went running on a few hours sleep for four days straight. Not good.

Anyway, it was entertaining enough. I like how the story paced itself as it was one competition after another. I like all the characters even the side ones. They have their own interesting quirks albeit cliched. I don’t like the ecchi aspect though – how “deliciousness” is depicted by characters in illusions of being in ecstacy while being naked almost akin to them having an orgasm. Yawn.