The next Batman film will have such high expectations to meet. Batman Begins was simply the best Batman film counting the first ones with Michael Keaton on them. Being the reeboot of the franchise, it offered a slightly different styling of the Dark Knight. Giving the Batmobile a tank-ish look was definitely a step away from the sleek chocolate-bar-on-wheels appearance that fans of the Batman are used to.

And one of the much-awaited teasers to be revealed for the sequel would be how they’d be styling The Joker. It has already been known that it’s Heath Ledger (escaping his Brokeback image perhaps) who’d be playing Batman’s nemesis but one of the great questions is how he’d be styled. Here’s the photo of Ledger as The Joker on the Cover of Empire magazine: 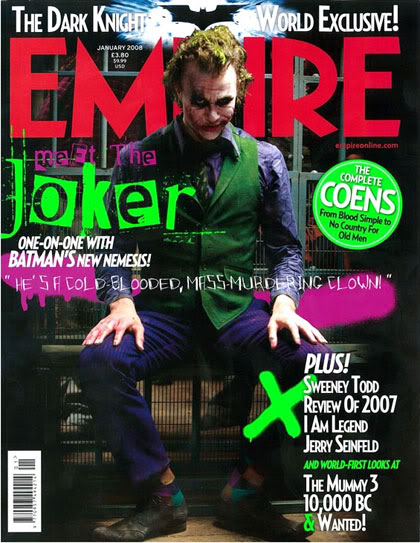 All I can say is wow. Just like many of the things in Begins, The Joker’s styling in this one doesn’t appear like it’s straight out of the comic or that animated series with a flowing green mane and fanciful face paint. He just looks like one really demented madman. Someone of which you’d be really scared just in case he pops out at the foot of your bed in the middle of the night. Nice.