Home » Crafts and Hobbies » Life-size KimiKiss standees you can kiss

Life-size KimiKiss standees you can kiss

Okay. I’ve seen FHM standees all around the metro. And I even remember a time when FHM raffled some of them off. Now what people do with them, I don’t want to know. But I’ve seen people kiss their crushes’ pictures in magazines and you can just hypothesize what perverted maniacs can do with life-size standees.

But how about these KimiKiss standees available at Akihabara in Japan? For those of you who haven’t encountered this yet, KimiKiss is that PS2 dating simulation game that has eventually evolved into a franchise with a manga, light novel, and anime to boot.

What’s so special about these standees? Well, let’s just say that otakus who… uhm… prove to be more than loyal fans can go up to these standees and kiss them. Signs even encourage them to do so and they even bear a not that the staff will pretend not to see. 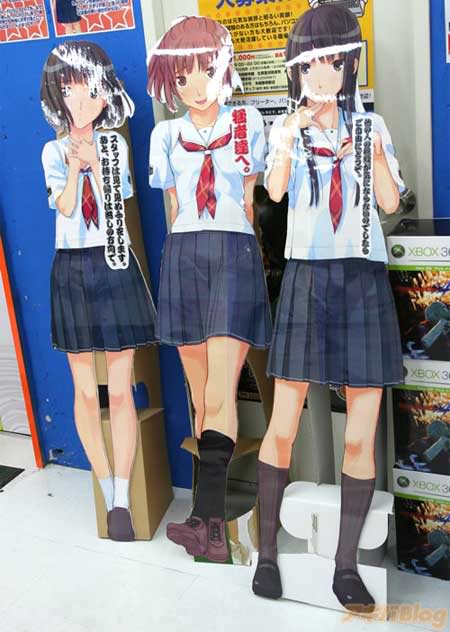 To violent fans: staff will pretend not to see, so if you don’t mind of other people, feel free to do so: It looks like you can kiss them.

These standees can be found at the Sofmap AM Branch which made them in anticipation for the release of the new KimiKiss game, eb! Kore Ebikore+ Kimikiss. This is the same store that made squeezable dummy boobs and butt that customers are allowed to fondled and feel.