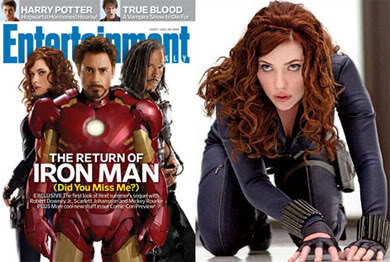 I’m all for more superhero movies and I just can’t wait for Iron Man 2. By far, I’ve considered the first movie as the best superhero movie ever and I’ve defended that position by classifying The Dark Knight as a crime drama. Anyway, so Iron Man 2 has got the green light and Entertainment Weekly featured three of the cast on the cover.

Anyway, the second movie is undoubtedly a star-studded cast with Robert Downey Jr. reprising his role as Tony Stark/Iron Man. Gwyneth Paltrow will also be back as Pepper Potts. And yes, Samuel L. Jackson will return as Nick Fury.

New additions to the sequel are Don Cheadle replacing Terrence Howard as Rhodey. Mickey Rourke plays Whiplash and Scarlett Johansson provides the much needed TnA as she Black Widow. I think the picture says for itself on what she brings into the party.