He may not be from Japan but as an 80s kid growing up in the Philippines, MacGuyver would definitely be part of my reality. And you have to agree with me, he’s amazing. He’s sugoi.

To me, MacGyver is the Renaissance Man. Forget Da Vinci. I didn’t know Da Vinci as a little kid. But I got MacGuyver on RPN9, so screw Da Vanci and his crossdressing Mona Lisa antics.

I kind of grew up idolizing MacGyver with all those mad skills and a Swiss Army Knife to boot. You just have to watch every darned episode to summarize how sugoi MacGyver is. He’s so cool, Kiko Machine (fellow 80s kids) paid him a tribute more than a decade after with a hip Pinoy rock beat aptly entitled MacGuyver. Sing with me now:

Beat that, Inspector Gadget! Well, I’m not too sure with the suka and toyo bit. I don’t remember MacGyver making adobo bombs. MacGyver nuts over at Wikipedia even made this list of the problems he solved per episode.

Ever remember when Mang Tomas All-Around Sarsa ripped his oh-so-cool opening theme off? That sucked big time. Anyway, here’s a video collection of the show’s opening themes for a bit of nostalgia:

By the way, his first name’s Angus. And Richard Dean Anderson will never be anyone other than Angus MacGuyver in my book (forget Stargate SG1). Harhar. 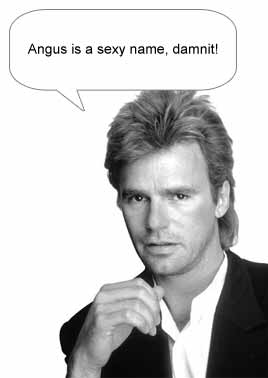