Home » Entertainment » What do Mikitty and Marippe have in common? 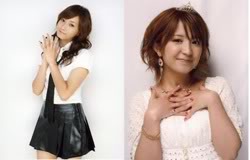 In true-blue chismis style, I present in a mouthful of words:

Apparently, according to Hello Online, the 22-year-old Fujimoto Miki, who had just been assigned as Morning Musume‘s leader after Yoshizawa Hitomi‘s graduation, followed the footsteps of ex-leader Yaguchi Mari, who got kicked out of the group because of her assignation with actor and heartthrob Oguri Shun – a big no-no for producer Tsunku and the rest of the Hello!Project management, as Mikitty was revealed last May 25 to be having a romantic relationship with Shouji Tomoharu, a comedian, and therefore announced her retirement last June 1, ergo holding the title of having the shortest term, of a mere 25 days, as leader in Morning Musume history.

Phew! I need a glass of water…