Film geeks and otakus unite! You can now watch Japanese films and anime for free, only this July! 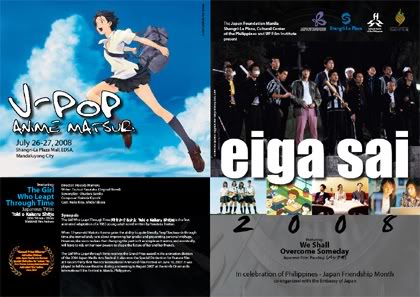 In celebration of Philippines – Japan Friendship Month, the Japan Foundation, Manila, in cooperation with the Embassy of Japan, the Shangri-La Plaza Mall, the Cultural Center of the Philippines, and the UP Film Institute presents a glimpse of the Japanese culture in Eiga Sai ’08.

This year’s offering brings together 5 contemporary, 1 classical and 2 animae/manga films in 35mm format that would surely amuse Japanese film enthusiasts and the general public as well. An invitational screening of We Shall Overcome Someday (Pacchigi) by director Kazuyuki Izutsu will be held on July 8, 2008 (Tuesday) at 7:00 p.m. at the Shangri-La Plaza Cinema 3, Edsa, Mandaluyong City.

In line with the celebration, the J-Pop Anime Matsuri to be hosted by the Embassy of Japan will be held on July 26 and 27 and the event includes the preview screenings of Chibi Maruko Chan (1990, written by Momoko Sakura) and The Girl Who Leapt Through Time (Toki o Kakeru Sh?ujo, 2001, directed by Mamoru Hosoda), a multi-awarded animae film that received the Grand Prize Award in the animation division of the 2006 Japan Media Arts Festival and the Special Distinction for Feature Film Awards at France 31st Annecy International Film Festival in June 2007.

All films will be shown with English subtitles. Screening venues are at the Shangri-La Plaza Cinema 3 (July 8 to 13, 26 & 27), CCP Dream Theater (August 7 to 10), and UP Film Institute (August 11 to 14 & 16). ADMISSION IS FREE. For detailed screening schedules and inquiries, please check the Japan Foundation, Manila website: www.jfmo.org.ph or call the JFM telephone numbers 811-6155 to 58.