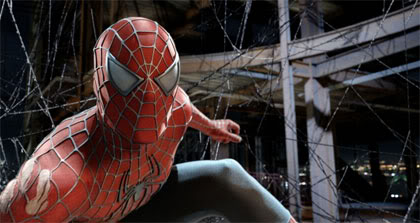 Quite honestly, I don’t quite like Tobey Maguire as Peter Parker. Sure he was able to pull off that dork-turned-hero role nicely but for the last movie, I was disappointed when he agreed to reprise his role. I think Jake Gyllenhaal would’ve made a better Pete. And oh, Kirsten Dunst. Yelch.

But I guess Maguire would be the real-world visage of Spider-Man as he is nearing locking an agreement to reprise the role for the next movie installment. Rumors had it that he might not be but Sony’s Columbia Pictures said that he would definitely be back. It’s a wonder why he wouldn’t want to. Save for the hectic shoot schedules and the fear of being stereotyped, who wouldn’t want a piece of the $2.5 B gross of the first three movies.

Possibly joining him for the Spider-Man 4 is director Sam Raimi. I can’t say that I liked his take for first three but for consistency’s sake, why not? Who knows? Maybe fourth time’s a charm. Raimi, in case he helms the film again, is also considering shooting the fourth and fifth installment continuously a la Lord of the Rings.

No word yet on whether Kirsten Dunst will be reprising her role as Mary Jane. But I do hope that they replace her once and for all. Once and for all!