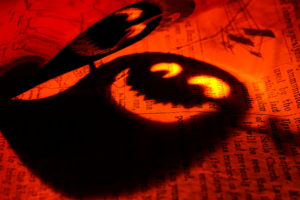 Okay, to clarify things. Hyde, who cosplayed as Suicide Squad’s Harley Quinn, isn’t the scary thing here. What’s so scary is the fact he darn pulled it off! He looks waaaaay prettier than some of the female Harley Quinn wannabes.

Since it’s the day of frights, I have a scary story to tell. This happened to me, personally, about twelve years ago during the first UP AME Fair (unakAME). I was a volunteer and had to support cosplayers during the event. At the end of the day, about 9 PM, I headed upstairs to the second floor bathroom to check on any personal belongings that have been left accidentally. Seeing that the bathroom was clear, I proceeded inside one of the stalls to pee. While in midstream (pardon the imagery), I saw a pair of bare feet from under the stall. Tired and hungry, all I could say was, “This one is taken,” thinking it was one of the cosplayers. But when I looked again, I saw that the feet were translucent. I finished what I was doing very, very quickly and then just pushed the door open and ran. My fear was that I would see the whole thing so I just ran without looking. Maybe I was just tired and hungry, and was just hallucinating but I don’t think I was.

And that is my experience with the ghost cosplayer.