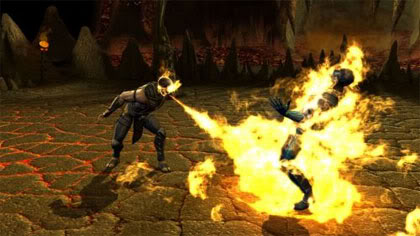 In my opinion, fighting game cross-overs are so Capcom. I liked them while they lasted. Street Fighter IV is probably the next big fighting game and this latest cross-over by Midway doesn’t seem to appeal to any more than your daily celebrity bikini photo post.

To answer Ace’s question as to whether this MK vs DCU game is a good idea or not, I say, it’s a hell of a bad idea. For one, the franchise just bastardizes both universes’ canon. How can Scorpion defeat f*cking Superman? Well in the game, it seems that Scorpion can since they’ve “normalized” super powers to make it a fighting game. I used to love Mortal Kombat but they lost me in the third installment. Or was it with the movie? I like DC too, but Superman is so cheesy of a superhero that he kind of messes DCU for me.

Anyway, this is pretty straightforward and not even an enticing screen shot leak at all. Scorpion toasting some dude. For more, here’s the trailer after the cut.